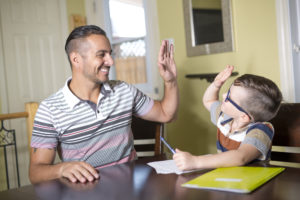 During a litigated divorce, judges must decide who will have the right to make non-emergency decisions about children’s living arrangement, where they will attend school, their medical care, and their religious training.  Courts may award sole custody to one parent or give both parents the joint right to make decisions about their children.  Having sole custody means one parent need not consult with the other parent when making decisions about the children.  On the other hand, having joint custody means decisions are made together after consultation with the other parent.  Texas public policy presumes it’s in the best interest of children for both spouses to be involved after a divorce, so joint custody is preferred if the court determines it’s in the children’s best interest.

Judges consider several factors when deciding to award sole or joint custody to parents: the mental and physical status of the parents, the ability of both parents to make decisions together, prior abuse or neglect, the willingness of each parent to keep the other parent involved in their children’s lives, whether disagreements are reasonable and related to the best interest of the children, the past, present, and future ability of the parents to cooperate in making decisions about their children, whether joint decision making is logistically possible given the living arrangement of the parents, and whether joint or sole custody is in the best interest of the children.

Mental and Physical Status of Parents.  The court will consider the mental stability and physical status of each parent in deciding to award sole or joint custody of the children.  If both parents are stable and able to care for their children, the court will generally order joint decision making.

Ability of Parents to Make Joint Decisions.  Judges will review the ability of parents to cooperate and make joint decisions when determining whether to award sole or joint custody to parents.  If the parents can cooperate, the court will generally order joint custody.

Prior Abuse or Neglect of the Children.  If there is evidence that one parent has been abusive or neglected the children, the court will generally award sole custody to the other parent and give him or her the right to make all decisions about the children.

Whether Disagreements Are Reasonable.  The court will determine whether disagreements between parents about how to raise their children are reasonable in deciding whether to award joint or sole custody.  If one parent is unreasonable, the other parent will generally be awarded sole custody of their children.

Past, Present, and Future Ability to Cooperate.  Courts will review the past and current abilities of the parents to cooperate and use that information to predict whether the parents are capable of joint decision making in the future or whether the court should award sole custody to the reasonable parent.

Is Joint Decision Making Logistically Possible.  If the parents live in different states and cannot easily communicate with each other, courts will generally award sole custody to the parent who has primary custody of the children.

The Best Interest of the Children.  Finally, the judge will decide whether it’s in the children’s best interest to have both parents involved in their lives or if that arrangement will produce high conflict and disrupt the children’s lives.  If the parents are not able to cooperate, the court will generally award sold custody to one parent and give him or her the right to make all non-emergency decisions about their children.

The post Eight Factors Judges Use When Deciding Who Makes Decisions About The Children After A Divorce appeared first on Collaborative Divorce Texas.