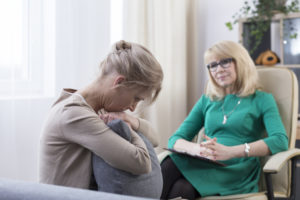 There is no stronger, more enduring or more destructive an emotion in divorce than fear.  It strikes at our very essence.  It immobilizes us.  Makes us sick with worry and unable to believe that we will ever again be alright.

President Roosevelt gave his first inaugural address in 1933, at the depth of the Great Depression.  He had been elected as President of a nation rich in natural resources and populated with creative, hard-working men and women.  There was much about the future which augured for the good.

But those breadlines and armies of unemployed men scouring the countryside for work transfixed the nation.  People were badly frightened – they began to doubt whether they would survive what seemed to be a perpetual depression.  Many gave up.

But President Roosevelt knew the depression could be lifted by vigorous action, which in turn required people to believe in themselves.  To have hope.  Because he knew it would require millions of citizens armed with optimism and energy in order to tackle the task of putting the nation back to work, so that better days would come.

Thus, in his ’33 inaugural address the President spoke the words perhaps most identified with him when he said “We have nothing to fear but fear itself.”  And he was right.

Fear is common in divorce.  If you’ve ever been in one then you know the profound truth of this.  You’ve experienced a fear that wakes you up at night.  That drains the energy from your body and from your mind.  That whispers in your ear, telling you that you will never recover but end up alone, broke and miserable.

Almost none of which is true, by the way, and very little of which comes to pass.  But, it dominates the thinking of many if not most divorce participants such that it creates a reality all of its own.  Fear is like an emotional black hole that sucks all of the energy and life from us.

How to Deal with Fear?

When you sense signs of anxiety, panic and fear within yourself, be still.  Take a look around.  Be aware of who and where you are.  Stop the mental dialogue that’s playing in your head, and be present in the now.

Be relentlessly intentional about it.  Set aside twenty or thirty minutes every day to do things that calm you and help you remain centered – mediation, music, exercise, yoga.  Whatever works for you, do it.

It helps to have someone to whom you can safely articulate your fear.  It will lessen it if you can just talk about it.

Most Importantly, Don’t Allow Your Fear to Rope You into Revenge or Self-Pity

Fear is just a physical reaction to a very stressful event – your divorce.  Your body – specifically your ancient, lizard brain – interprets the stress as an extinction level event.  And it causes your body to react accordingly, by preparing it to either fight for your survival or flee for your life.

Neither is going to happen because there’s not really an extinction level event out there – but we human beings get tricked by our own bodies.  If we feel such a strong emotion (“I am REALLY afraid”) then we believe that there must be something out in the world that matches up with our fear (“I wouldn’t be so afraid unless there is SOMETHING out there to fear”).  We believe that for every fear there is a commensurate, real-world threat to our survival.  There’s not.

As my dear old granddad used to say – “I’m not afraid of the dark, just what’s in it.”  Fear is our darkness.  In and of itself it is impotent.  It’s what fear does to us, and causes us to do in turn, that renders it powerful.  Don’t surrender yourself to your fears.  Don’t take counsel of them.

Fear is a mind game but it’s OUR mind game.  Understand it.  Don’t give in to it.  And remember, brothers and sisters, what we have most to fear is fear itself.