Getting A “Get” – The Problem of Jewish Divorce 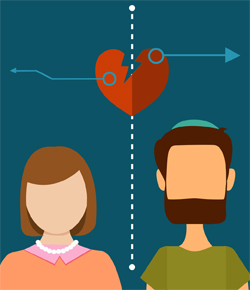 Religious Jews who wish to divorce can have a problem: a civil divorce alone does not release them to remarry.  Pious Jews need a release by a properly constituted religious body before they are free to enter into another martial relationship. It has been the conventional wisdom in the past that this is a matter of no concern to the civil courts; that the doctrine of church-state separation forbids intervention in areas that are essentially of a religious nature. This is not necessarily the case, and the informed family lawyer can perform an important service for such clients.

A Jewish divorce is called a “get.” It can be applied for before or after a civil divorce has been granted. It is a simple document, consisting of twelve lines, that must contain the signatures of two witnesses, and attest to the termination of that marriage. It states that the scribe who wrote the document has been authorized to prepare the document by the husband. Thedocument is delivered to the wife by the husband or his agent in front of a Rabbinic Council called a Beth Din. It must be “voluntarily” accepted by the wife. It is analogous to a “release of lien” in that, until it is executed and delivered to the woman, she is not free to remarry.

The collaborative process provides a mechanism for the resolution of these matters by providing a forum for the discussion of the goals and interests of both parties in a non-adversarial atmosphere; it can be the springboard for an agreement between the couple to obtain a “get”.  The lawyers for a Jewish couple will do both parties a great service if they raise the issue of Jewish divorce with them when preparing premarital agreements or assisting them in reaching a collaborative divorce settlement.

The post Getting A “Get” – The Problem of Jewish Divorce appeared first on Collaborative Divorce Texas.