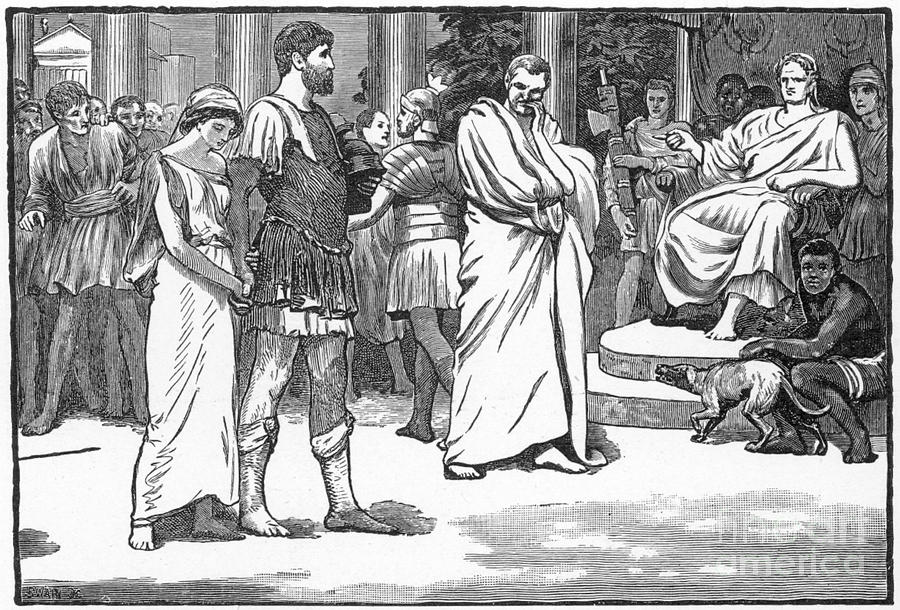 The earliest recorded case of divorce in ancient Rome involved a patrician who divorces his wife because she was barren.  Roman law also allowed men to divorce their wives for drinking wine, going to a public place of entertainment without consent, and other acts of moral perversity.  A Roman husband had no duty to support his wife after a divorce for cause.  Later, when Roman women attained the right to own property, they could sue for divorce as well.  Marriages between Roman citizens were a private partnership formed by mutual consent.  When affection turned to indifference, the couple could divorce by giving formal notice.  Roman law didn’t require a judicial inquiry into the causes of divorce.  Ancient Romans could divorce by sending their spouse a letter or declaring before witnesses that they wanted a divorce.

Children belonged to the father and there was no community property in Rome, so the only asset to argue about was the wife’s dowry, which generally had to be returned to her family if the husband initiated the divorce.  Women who brought a large dowry into a marriage had considerable power because her husband might face financial difficulties if he initiated the divorce and had to return her dowry.  If the wife initiated the divorce, the husband was allowed to keep 1/6th of her dowry for each child, up to three.  If the wife committed adultery, the husband could retain another 1/6th of her dowry in addition to the fraction for each child.  Husbands could deny their divorced wives access to the children.  Some Roman women won custody of their children because the father was declared “wicked” but this was rare.  No matter where the children lived, both Roman parents were financially responsible for their support.

Passed in 449 B.C., the Justinian Code allowed women to divorce if they proved their husband had plotted to murder them, whipped them, or brought prostitutes into their home.  Around 420 B.C. divorce laws in Rome were made more restrictive and wives had to prove their husbands were guilty of vice or forfeit their dowry to obtain a divorce.  Roman parents were required to support their children, but that was rarely an issue in divorce.  However, how the wife’s dowry was divided and who could have access to their children could be contentious.  Under Emperor Augustus, a husband was required to divorce his wife if she committed adultery and she was required to forfeit ½ her dowry and 1/3 of any other property she owned.

By around 300 B.C. Roman citizens were becoming concerned about the high incidence of divorce and its impact on children.  In the reign of Constantine, divorce could only be obtained by a wife if she could prove her husband intended to murder her, he was a preparer of poisons or a disturber of tombs.  Otherwise, if a wife asked for a divorce, she lost her dowry and was exiled to an island for life.  A husband could only divorce his wife if he proved she was an adulteress or a preparer of poisons and he was required to return her dowry as part of the divorce.  If the husband remarried, the wife could invade his home and take the new wife’s dowry.  If both parties agreed to the divorce, the new laws had no effect on their divorce.

Marriages could be declared void under Roman law if contracted under mistaken beliefs, such as if the wife turned out to be a slave rather than a free woman.  In these cases, the innocent party was entitled to retain custody of their children.  The husband was entitled to keep their children in most cases, even if he was the guilty party.  These restrictive divorce laws created so much discord among Roman citizens that they were repealed by Justinian’s successor, who reinstated divorce by mutual consent.  If a spouse became insane, the partner could submit an application to the Emperor for a divorce on the grounds that the marriage has ceased to exist because if the insanity had occurred prior to marriage, the union would have been void.

During later centuries, there was constant competition between Roman Emperors and the Pope over the right to control marriage and divorce.  Roman Emperors sided with their citizens and upheld the right to divorce by mutual consent, but Church authorities wanted to restrict the rights of Romans to divorce.  A judicial inquiry was necessary only when the parties could not agree on the terms of their divorce.  Roman courts looked at fault when granting a divorce.  If a spouse was guilty of perverse morals, the courts would require him or her to forfeit property to the innocent spouse.  Roman courts also exercised jurisdiction over the children when the divorce was contested, deciding where they should live and requiring both parties to contribute to their support.  If the parties were equally guilty of moral perversity, the courts left them in possession of their own property and granted a divorce.