Jealousy Between Divorcing Parents and Children 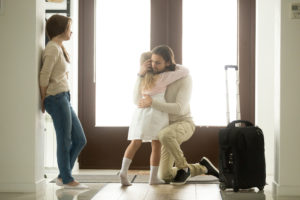 A divorcing parent often feels jealous when their children establish a close relationship with the other parent.  The parent may criticize their children because of his or her jealous feelings, and the negative messages have a damaging effect on the children’s emotional development, making the children feel they are “not good enough” to deserve love.

A divorcing parent who feels jealousy can give his or her children confusing emotional messages.  Children need to feel loved by both their parents, but if they get too close to their divorcing father, their mother may feel threatened and the divorcing father may feel jealous if the children get too close to their mother.  But, if the children stay away from one parent, they lose that parent’s love and support.  These children are caught in an emotional bind.  To avoid this damaging situation, divorcing parents should strive to maintain a close relationship with their children, support them, and offer the children love and encouragement.

Avoid Feeling Jealous During a Divorce.

There are two main ways for divorcing parents to avoid feeling jealous of their children during divorce.  The better method is to opt for collaborative divorce rather than litigation.  By choosing collaborative divorce, the parents will learn how to communicate, develop better parenting skills, minimize the stresses of divorce, avoid feeling insecure, and have a good chance of avoiding jealousy.  If the parents choose litigation and one of them later feel jealousy toward their children, the jealous parent should see a counselor about their jealousy.

During this post-divorce transition, children become reattached to their divorced parents.  However, when a divorced parent begins dating, the new relationship can cause jealousy among the children.  The daughter may feel displaced by her father’s new girlfriend and the son may feel displaced by Mom’s new boyfriend.  Additionally, Mom may worry about what would happen if the children decided they wanted to live with their Dad and his new spouse, and that may cause her to feel jealous of his bond with the children.

Most children of divorced parents experience jealousy when their parents begin dating and divorced parents may feel jealous of their children’s bond with the ex-spouse.  Jealousy is a natural reaction when family dynamics shift.  And, the dating parent is usually so happy to be in a new relationship that he or she may neglect the children for a while.  The best way to handle family jealousy is to hold a frank and open discussion between parent and children about their feelings.  Also, the children should make an effort to get to know father’s girlfriend or mother’s boyfriend—they may actually find they like them.