The History of Divorce – Part 4 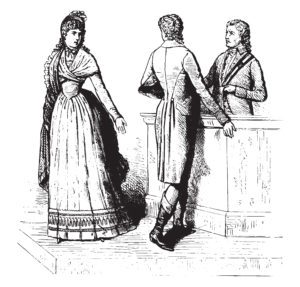 During the 11th Century, Pope Gregory VII excommunicated all Eastern Orthodox Christians because he was competing with the head of the Eastern Catholic Church for Papal power.  The Eastern Orthodox Church never adopted the view that celibacy is the preferred way of life for Christians, and Eastern Priests were allowed to marry and divorce.  Eastern Orthodox divorces required a judicial trial and courts granted divorces on grounds of impotence, attempted murder of a spouse, long absence, abortion, taking monastic vows, treason and other crimes, adultery, and religious differences between the spouses.

Popes and Emperors.  As the authority of Western Roman Emperors declined, strong Popes extended their authority over much of secular life.  Emperors such as Charlemagne and William the Conqueror willingly ceded authority over marriage and divorce to the Pope in return for his blessings of their Devine right to rule.  The Church gained control over the daily lives of Catholics and Bishops gained the power of excommunication to enforce their rulings.  Monks sworn to celibacy made rulings about people’s sexual problems and often found that power quite profitable.  Even though Catholic marriages were indissoluble, the clergy developed ways to dissolve marriages by judicial separation or annulment.  Once the spouses were separated, the Church paid little attention to what they did.  If they remarried or lived in adultery, that was considered a minor sin that could be handled by penance.  The discretion of Bishops and the Pope over marriages and divorce was practically unlimited, and the Church often contrived to allow rich and powerful members to divorce and remarry within the church.  During the Inquisition, a husband or wife could obtain a divorce by accusing his or her spouse of heresy.  Since the accused were almost always put to death, this effectively gave the accusing spouse a divorce.

the financial excesses of the Catholic church.  Martin Luther objected to the corrupt dispensations and indulgences Bishops and the Pope offered wealthy families to avoid restrictions on divorce and remarriage.  Martin Luther argued that divorce should be available on limited grounds to all.  Within a few years, Protestant countries such as North Germany, Switzerland, Holland, Scotland, and the Scandinavian countries rejected canon law and began to allow divorce on limited grounds.

Reformers proposed that marriage is a social contract, that divorce should be available for adultery and desertion, and that a judicial trial was not necessary.  A typical case of desertion involved a couple who were married in a Catholic country.  When the husband became a Protestant, he fled to Holland fearing the Inquisition.  His wife remained faithful to her Catholic religion and refused to move because she feared their children would be raised as Protestants.  The wife received a separation on grounds of heresy and the husband applied to the Supreme Court of Holland for a divorce on grounds of desertion.  The Dutch court granted his divorce, allowed him to remarry, and ordered his ex-wife to restore his property.

Protestant Divorce.  Even though marriage was secular and divorce was available in many Protestant countries, lawyers trained in canon law justified divorce on theological grounds.  Any deviation from Scripture was condemned as heretical.  Even when divorce became more readily available, it was associated with public disgrace.  Reformers rejected the idea that marriage was indissoluble, but they allowed the couple little voice in the matter.  The divorce trial became a prosecution of one spouse by the other, much like American divorces prior to the introduction of no-fault divorce laws.  Reformers rejected the idea that marriage is sacred, but they placed sufficient legal and procedural barrier in the path of divorce to make getting out of a marriage difficult and expensive.

The lot of women under the Reformers was little better than under canon law.  Women were expected to endure abusive marriages and they had no legal rights to their children.  A wife had no legal personality before the courts and her husband had the right to dispose of all their property.  Women were obliged to follow their husband, and if she did not, she could be accused of desertion and he could divorce her.  If the wife committed adultery he could sue her for divorce and damages.  Even the refuge of the convent was no longer available if she wished to divorce her husband.

The post The History of Divorce – Part 4 appeared first on Collaborative Divorce Texas.