‘Til Death Us Do Part 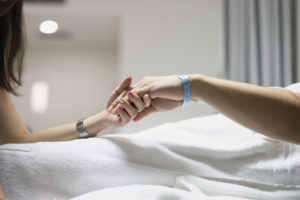 ‘Til Death Us Do Part – The Unintentional Fulfillment of Their Marital Vows, Even After their Divorce

A former client called me today to ask what to do with regard to child support since her ex-spouse had died.  After I told her, she thanked me for my help in their divorce.  They divorced collaboratively.

Explaining that as he was dying following a long illness, her ex-inlaws were present as was she.  She knew he was suffering on that last night and so she told his sister that she was staying with him.  She lay down on the bed with him and he put his arm over her as he had done during their twenty-five year marriage.  She awoke later to discover that he had passed away.

Her mother-in-law insisted that she attend the funeral with them and my client’s two children and that they face this as the family that they still were.

Crediting the Collaborative Divorce Process, my client states that they would not have had this type of relationship but for the dignity and respect that they committed to during their divorce.  When we divorce Collaboratively, we hope the result will be good for the families going forward.  What a huge testament to both of these parents and my client’s former in-laws for maintaining their love and grace during this very difficult time.  They refused to hate and chose to love and honor each other, and thereby their family as well.  While they had dissolved their marital vows many years before, those parts of their vows actually survived.

The post ‘Til Death Us Do Part appeared first on Collaborative Divorce Texas.